On September 12, 2020, I started as a participant in the mentorship program of Nature Photography by famous Dutch photographer Bart Siebelink. I wrote about this for the first time in an earlier blogpost, see this LINK.

The second meeting was on October 2, 2020 held in Rhenen, the Netherlands. We needed to focus on animal "parts" in which a head and eyes could not be seen, to learn to look differently at a subject. For this we captured photos in the Zoo of Ouwehands Dierenpark. Normally I am not fond of Zoos. I love animals in the wild, free of any restricted space. I do know that Zoos can have an important function, like breeding endangered and rare species to conserve their genes for future releases and an educational purpose. So that being said, I will discuss two photos that I took that day: 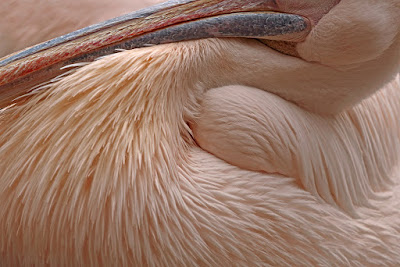 Process: this pink pelican folded its wing and neck together like a compact package. Because there was also a pelican behind it, I could completely “fill” the image with pelican.

Idea: what struck me were the many curves into which the body is folded (just like real life that goes in many bends and curves) and the different directions the feathers point to.

Digital editing: the photo has been edited in PS Elements (dust removal, contrast, saturation). I applied the Levels (histogram) for a nice distribution of the dark and light areas, as well as a little bit of Shadow/Highlight.

What do I think of it? I am very happy with this result. The almost woody structure of the beak contrasts beautifully with the soft, pastel colored plumage.
The second photograph open for discussion, is this one: 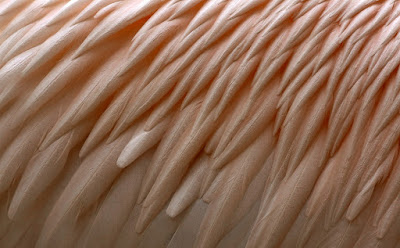 Title: I will wear my pink armor today.

Process: the overlay of the beautiful pink feathers in the plumage of this pink pelican attracted me, how softly/gently this is.

Idea: it may not be very original to photograph a plumage. However, what struck me is the metallic-like shine of the feathers due to the soft light touching them. Hence the association with an armor (title). Taken at a high aperture (F10) for sufficient detail.

Digital editing: the photo has been edited in PS Elements (dust removal, contrast, saturation). I applied the Levels (histogram) for a nice distribution of the dark and light areas, as well as a little bit of Shadow/Highlight. I cropped the image slightly for a more panoramic effect.

What do I think of it? The result is appealing, though not really original. But the colors and the soft shimmering light on the plumage attracted me. I was able to fill the entire image with this pattern.
Geplaatst door Marta Demarteau op 01:46 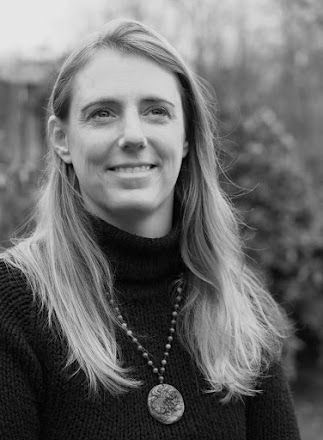